This year the conference was held at the Blackwell Grange Hotel, Darlington on 11 – 12 September. Hosting the conference does rely on willing volunteers to organise the event in their own time, and I certainly had a lot of help from colleagues in my own department and from other radiographers within the Northern Region, with particular thanks to Liz Judson, Pat Conlon and Faye Bibbings. Thanks also to the following companies who sponsored the conference E-Z-EM, Guerbet, Sanochemia, Agfa, Siemens and Philips.

On the weekend of the conference I was so grateful for all of those people who pitched in sorting out programmes, all the freebies and any of the problems that arose. My particular thanks goes to Gary Culpan, who came to the rescue with the audio-visual equipment. To cap it all on that Saturday, I just could not believe when the fire bell went off just as we sat down to dinner! I was sure that someone was just playing a joke. The food and hotel staff came in for very high praise, and I must say the food throughout the whole weekend was excellent both in quality and quantity. 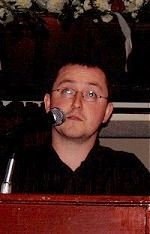 Agenda For Change can be downloaded as a PDF file.

However, we have taken note from the delegates that perhaps there is a need to provide more clinically based study days. This may be because some GI radiographers are not able to access clinical training and education as easily as others.

We were delighted to have as our keynote speaker Kay East, the Chief Health Professions Officer. Her presentation was centred on the national agenda and modernisation of the NHS, and Allied Health Professionals role development.

We certainly now have a champion in Kay, as she has demonstrated by including two short articles on GIRSIG in the October and November issues of the Allied Health Professions Bulletin. You can access the bulletin via the Department of Health Website.

The programme contained a good level of clinical content with four GI / Fluoroscopy radiographers presenting their work to a national audience, either in presentation or poster format. On the Saturday, the successful candidates presented their case studies on audit of practice and service developments within their respective Trusts. The case studies were not just barium enemas, and this emphasizes the diversity of roles that GI radiographers are involved in. GI radiographer role development has evolved rapidly over the last ten years, and the opportunities that the four presenters have grasped may have seemed to have had little in common with the some of the delegates who were at the early stages of GI role development. But it will probably be the future for some of those delegates, especially if the numbers of enemas performed falls due the use of CT Colonography.

There was a good entry for the poster section. Dr East and Gary Culpan judged the poster submissions, with prizes being awarded for 1st and 2nd places to Liz Judson and Sue Rimes. Well done.

The four workshops, with delegates being able to attend two, were very successful. The people who kindly ran the workshops had, in some cases, stipulated maximum numbers in order for delegates to get the best out of the sessions. So, unfortunately the numbers had to be restricted.

The swallowing workshop by Maxine Power dealt with normal and abnormal swallowing, and was extremely interesting and informative not only for those GI radiographers already involved in videofluoroscopy swallows, but also those contemplating moving into this area of role development.

Research and publishing is something that most of are not as involved as we should be. Peter Hogg provided the delegates with an insight into the importance of publishing our work in that it adds value to our work and that we have a responsibility to share our practice. Those of us who attended his workshop felt it was extremely valuable and helped allay some of the fears that we have towards publishing.